Italian sports fashion brand ellesse, launch ‘For The Win’ campaign – reinforcing the brand’s winning mindset, which is more than just an outcome, it’s a style, confidence and attitude. ‘For The Win’ seeks to bring the emotion and attitude back to this iconic brand through their contemporary fashion and product point of view.

ellesse have appointed leading global fashion and lifestyle agency Laird+Partners and acclaimed fashion photographer Cass Bird to create this new brand position, identifying a new platform ‘For The Win’ that will heighten the brand, and reinforce founder Leonardo Servadio’s vision that looking and feeling your best allows you to win regardless of outcome.

The campaign ‘for the win’ introduces a rich array of diverse global talent, cast for their current cultural position and embodiment of the ellesse winning mindset. ‘For The Win’ presents Game of Thrones actor and musician, *Raleigh Ritchie aka Jacob Anderson. His unique attitude in all of his artistic endeavors aligns seamlessly with the brand’s interpretation of what it means to win. The campaign see’s rapper *Princess Nokia featured as her striking take on style and her infectious approach to life is a true embodiment of the ‘For The Win’ mantra.

Owning creative credibility is photographer, *Margaret Zhang who has always embraced all values relating to this winning mindset, bringing a refreshing attitude, style and drive to all that she excels in. US musician, rapper and songwriter *Saint Jhn, is fitting talent for the ellesse campaign thanks to his unique voice and striking, rockstar style. Adding a touch of fashion elegance is Austrian model, Stella Lucia who brings to the campaign her style and captivating presence which paved the way for her as the perfect addition to the ellesse ‘For The Win’ platform. Finally, British model, *Kit Butler, named as the male answer to Cara Delevingne and one of the biggest models gracing the catwalks, brings to the campaign style credibility in sports and fashion, both areas synonymous with ellesse from the brand’s birth. 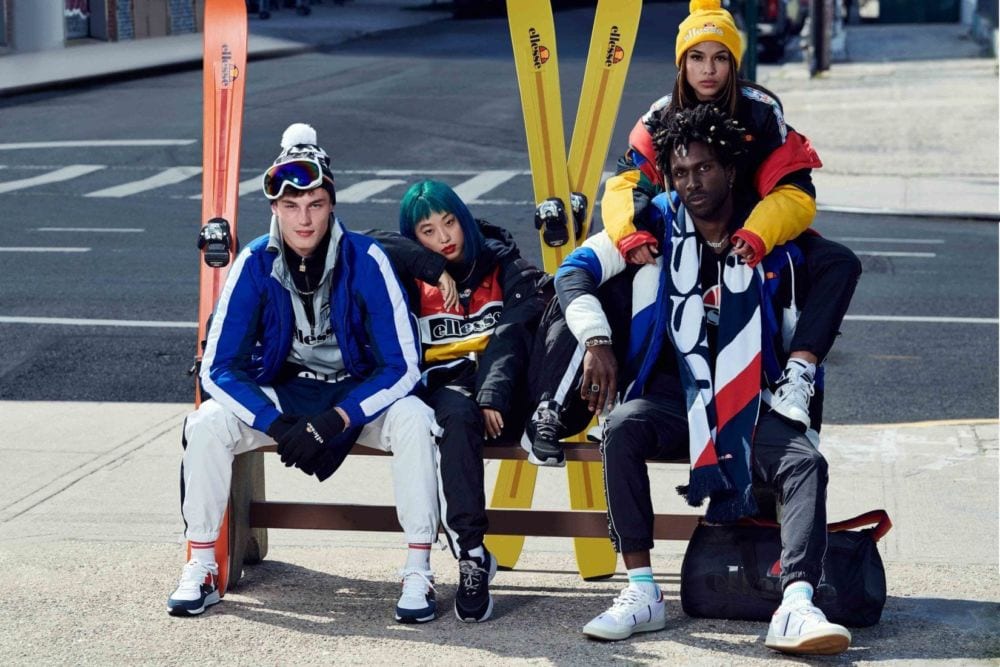 Combining the new campaign platform ‘For The Win’ with the AW19 product offering, the latest collection is divided into two central themes; ‘Urban Tailored’ and ‘Urban Ski’.

As a tailor and passionate skier, Leonardo Servadio’s influence is clear throughout the ‘Urban Tailored’ theme taking classic tailoring concepts and applying them to modern streetwear. ‘Urban Ski’ pays homage to ski apparel’s influence on 80s and 90s streetwear, featuring form fitting, overstated colour ways alongside classic adaptations of the ellesse logo. Staying true to the founder’s vision that looking and feeling your best allows you to win regardless of outcome. The brand’s effortless approach to style is showcased in all pieces from AW19 offering and still remain functional and highly wearable.

‘For The Win’ embodies a way of thinking that has remained synonymous with the brand throughout its history, and harks back to an emotional mind-set that is lived and breathed not just in sport, but in everyday life. Built on style and attitude, ‘For The Win’ is energetic and expressive, exuding confidence from the slopes to the street. 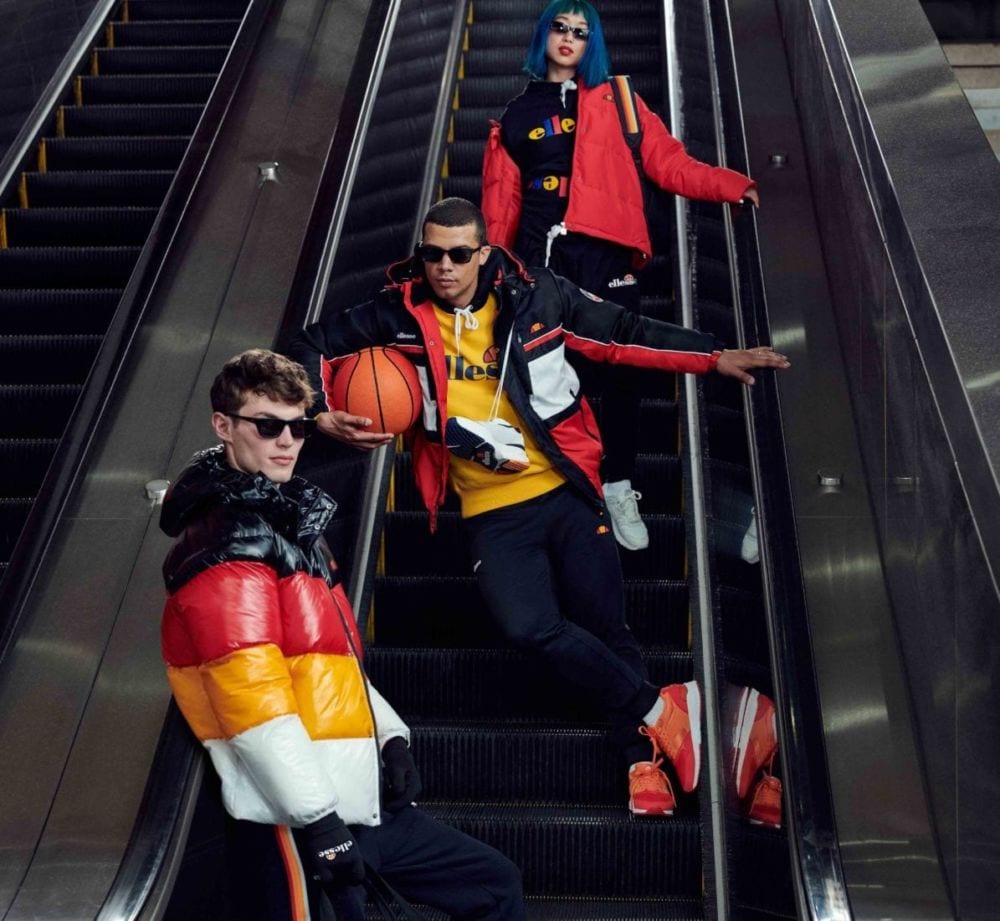 Raleigh Richardson is truly a global phenomenon, with relentless momentum following his central role in HBO’s seminal show, Game of Thrones. Jacob’s (Raleigh Richardson) debut album was released in 2016 to critical acclaim, with the artist holding over 200 million steams to date. His unique attitude in all of his artistic endeavors aligns seamlessly with the brand’s interpretation of what it means to win. @raleighritchie

Emerging Brooklyn based emcee, SAINT Jhn is recognised for his sophisticated, ultra-dynamic approach to rhyme production. Growing up between Guyana and America, his stage presence and signature array of harmonious vocal hooks have quickly led him to global recognition and he is a fitting talent for the ellesse campaign, thanks to his unique voice and striking, cinematic style. @saintjhn

the Australian-born Chinese Director and photographer began her career at 16, establishing her website in 2009. She has gone on to become a globally recognised photographer, stylist, writer, creative director and consultant, taking life ‘For The Win’. Her work in shaping the international fashion industry has been recognised by the Business of Fashion BoF500 Index for the past four consecutive years and Margaret has also featured recently in Forbes Asia’s 30under30. From the start, Margaret Zhang has embraced all values attached to the ellesse AW19 campaign, bringing a refreshing attitude, style and drive to all that she excels in. @margaret_zhang

A truly pioneering voice in contemporary music, Princess Nokia is a fiercely independent artist who is quickly becoming one of the revered and outspoken rappers on the scene today. Born Destiny Frasqueri, she has been releasing music via YouTube and Soundcloud since she was in high school and catapulted herself to the next level with her 2017 album 1992 Deluxe–steadily gaining tens of millions of streams, selling out venues across the globe and performing at marquee festivals including Coachella, Glastonbury & Primavera Sound. The artists’ striking take on style and her infectious approach to life is a true embodiment of the ‘For The Win’ campaign mantra. @princessnokia

Making her fashion week debut in Giles S/S15, Austrian-born model, Stella Lucia has gone on to work with numerous designers including Givenchy, Alexander Wang, Riccardo Tisci, Chanel and Calvin Klein to name but a few. Stella is currently one of the most exciting models working today and is fast building a portfolio amongst some of the most exciting names in the fashion world. Her style and captivating presence pave the way for her as the perfect addition to the ellesse ‘For The Win’ campaign. @stellaluciadeopito

Cited by Vogue as Menswear’s answer to Cara Delevinge, British model, Kit Butler is currently making waves in the industry thanks to his sparky personality and classic good looks. Kit’s eclectic CV boasts a blend of heritage labels and London cool, a combination that attributes itself perfectly with ellesse’s ‘Urban Tailored’ and ‘Urban Ski’ themes. Growing up on the rugby pitch, Kit also holds a deep connection to sport, an area synonymous with ellesse from the brand’s birth. @kitbutler

Italian Sports Fashion Raise Your Game With Our ellesse ‘FOR THE WIN’ Campaign – View our full collections here.

About the Author: Lucas

We use cookies to ensure that we give you the best experience on our website. By dropping in, you agree on our use of cookies. Ok